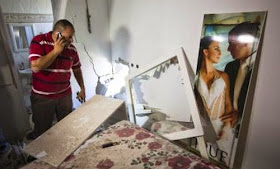 Evelyn Gordon reports that the Government of Israel continues to treat the southern part of the country with a NotInMyBackYard attitude. This article was received by email and was published in the JPost premium pages.


My vote for most outrageous remark of the war goes to an unnamed senior IDF officer who pooh-poohed southern residents’ anger at seeing rocket fire from Gaza resume just two days after the army said they could safely go home.

“It is possible now to be within those areas now just it was possible during [Operation] Protective Edge to be in Tel Aviv and Beersheba, even though there was firing,” he insisted. “This is not a new situation for [southern] residents. They have protected rooms, and with proper protection it is possible to live there ... These communities have been fired on for years and people did not leave because of it.”
What makes this outrageous isn’t just the content, but the speaker: A senior officer of the army charged with protecting Israel against external threats has essentially declared that tens of thousands of Israelis have no right to expect such protection. Instead, they must continue living with daily rocket and mortar fire, playing Russian roulette with their families’ lives and watching their children develop post-traumatic stress disorder.
Moreover, an officer charged with protecting Israelis against threats showed himself incapable even of identifying a threat. Comparing the south to Tel Aviv is ludicrous. Tel Aviv suffered one or two rockets a day during the month-long war and is rocket-free between wars. The south has suffered one or two rockets a day for nine years straight and dozens a day during wartime. Tel Aviv’s situation is indeed one people can live with. The south’s isn’t.
True, southern residents “did not leave” despite being “fired on for years,” but even heroes have breaking points. Southerners heroically endured for nine years in the belief that eventually, the government and army would restore security. The latest war shattered that belief.
First came the discovery that Hamas had dug dozens of cross-border tunnels from Gaza that emerged near southern communities. Hams could have used these tunnels to kidnap and kill hundreds of southerners, and apparently intended to do exactly that. Yet for years, despite knowing the tunnels existed, the government and army did nothing about them, and even once the war began, the cabinet, with full IDF backing, sought to end it before a single tunnel had been demolished. Only when Hamas rejected a cease-fire did the government order the tunnels destroyed. For southerners, the message was clear: Neither the government nor the army had any interest in protecting them; both were willing to abandon them to the tunnel threat.
Then came the discovery that the tunnel network was far more extensive than the IDF had thought. This intelligence failure left southerners with little confidence in the army’s assertion that all tunnels have now been destroyed, a concern they have voiced repeatedly.
Third was the army’s announcement two weeks ago that the war was over and southerners could return home, only to have Hamas resume shooting two days later. GOC Southern Command Sami Turgeman and Gaza Division commander Mickey Edelstein at least apologized; Chief of Staff Benny Gantz didn’t even do that. The lesson for southern residents was twofold: Not only are the IDF’s assurances untrustworthy, but its top officer doesn’t even care enough about their safety to feel guilty about misleading them.
The result of all this is that residents of southern communities are now openly questioning whether they should stay. During the war, these communities turned into ghost towns, and a poll published last week found that 20% of residents are considering making this exodus permanent.
“As a parent, I’m struggling with a very big moral dilemma here, and that dilemma is how much risk am I willing to expose my children to,” one southerner explained, noting that the daily “drizzles” of rockets and mortars “make our life unbearable.”
"The residents of the area are exhausted,” added another. “We're frustrated that no long-term, strong, stable solution has been reached. That's why the residents want to leave the community – because of lack of confidence in the government, whose role is to provide us with security.”
“It's impossible to raise children in an awful situation like this,” agreed a third.
Last Thursday, when 10,000 people – mainly southerners – demonstrated in Tel Aviv to demand that the government finally restore their security, Eshkol Regional Council head Haim Yellin put the issue in a nutshell: “A sovereign state must protect the security of its residents, even if they live in the periphery,” he declared.
The reason why ought to be obvious. The south isn’t “occupied territory”; it’s sovereign Israel. If Israelis won’t even fight to defend that, terrorists won’t stop at turning the south into a wasteland; they’ll spare no effort to extend these tactics to the rest of Israel. And the entire Arab world – even those parts that currently oppose Hamas and Hezbollah – will support them, convinced that they’ve finally found a recipe for Israel’s destruction.
Of course, the IDF isn’t primarily to blame for the senior officer’s attitude: The army of a democratic state is supposed to execute the government’s policies, and his remarks faithfully reflected the policies of three successive prime ministers: Ariel Sharon, Ehud Olmert and Binyamin Netanyahu.
Yet the IDF’s attitude also matters, because it constrains the government’s options. It’s no accident that, as Israel Hayom noted, Gantz “was recently quoted as saying that every plan the IDF presented to the cabinet was approved and nothing the military did not want to see happen, happened” during the fighting in Gaza. Since the army prepares the operational plans and trains soldiers to execute them, it’s virtually impossible to assign it a mission senior officers oppose: They can simply declare the goal unachievable, then make this a self-fulfilling prophecy by failing to present viable plans or properly prepare the troops.
Ordinary Israelis do seem to grasp the magnitude of the southern threat: In one poll last month, fully 87% of respondents opposed a cease-fire, saying the war should continue until Hamas is defeated. Unfortunately, our political and military leadership has demonstrated no similar understanding. And that means both must be replaced by people who do – before it’s too late.

There was interview on Israel Radio after midnight last night with someone living in southern Israel. A large portion of the kids there have post traumatic stress disorder. Even grown-ups are afraid to get into the shower alone in case an alarm goes off. This is no way to live. Unless the government is willing to see our borders eroded (who will be next?), relying on the good graces of Hamas and Islamic Jihad not to shoot at us seems to be is insane.