Glasgow loses hundreds of US visitors over flying 'Palestinian' flag 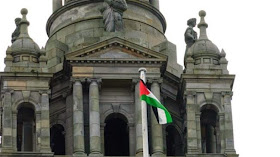 The city of Glasgow (Scotland)'s decision to fly the 'Palestinian' flag has led to 600 US visitors (the kind of business visitors who spend money) canceling plans to visit (Hat Tip: Sandy W).


The city was expected to host a major event to reward US salesmen and women, which would have injected thousands of pounds into the economy, but now the six-day trip has been cancelled.

Richard Cassini, vice-president of one of the leading special event companies behind the trip, emailed the Lord Provost Sadie Docherty to inform her of the boycott.

Mr Cassini wrote: "I was spearheading an event in Glasgow for 600 business visitors to be guests of your wonderful city.

"We were scheduling six days in Glasgow, three for business and three for leisure time.

"Having read your statement endorsing Hamas and its leadership due to the number of Muslims in your city, I have decided to cancel all plans for our trip.

"We are a Fortune 500 company, so costs were really not a serious consideration, location was.

"Hopefully, the Muslim population that you so sincerely endorse will have the spending power of the very people you have chased away so well."

The council confirmed today that they had received the email but had not yet replied because of the volume of responses to the decision to fly the flag.

It should be the first of many.
Carl in Jerusalem at 4:46 PM